Sodium cromoglicate reduces the release of histamine from the mast cell to stop allergic reactions due to allergens such as pollen, giving it a descriptive name of mast cell stabilizer.

Histamine is mainly stored in mast cells. During allergic reactions, histamine levels increase, causing the main symptoms of hayfever, such as itchiness (pruritus), sneezing (White, 1990). It is the histamine which contributes to symptoms of ocular (eye) allergic symptoms like redness and watering of the eyes.

Sodium cromoglicate eye drops are available as the general sale list item (GSL), meaning they can be purchased from any retail outlet or as pharmacy only medication (P), available only from pharmacies including online chemists.

Drops containing sodium cromoglicate should not be used in children under two years of age.

Sodium cromoglicate drops: use in the pregnancy and lactation

How often should sodium cromoglicate be used?

For adults and children over six years of age, One or Two drops should be instilled into each eye four times a day.

What sodium cromoglicate drops can you buy? 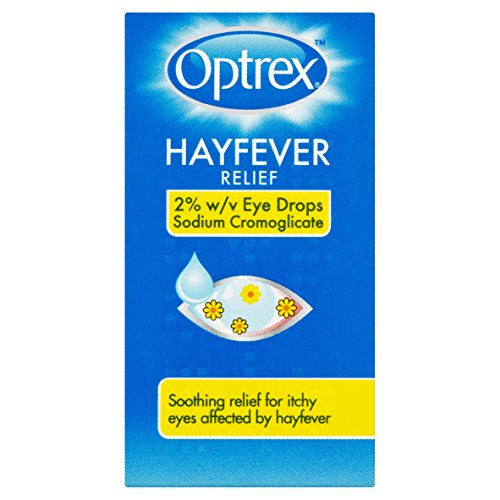 Contact lenses should be removed before application and put back at least 15 minutes after the application. The same advice applies to preservative-free, single-use eye drops.

Some possible side effects associated with the use of sodium cromoglicate containing eye drops may include (frequency not known):

Other options in the management of seasonal hayfever

Seasonal hayfever can be managed with different drugs available in supermarkets and pharmacies. Antihistamine tablets and steroid nasal sprays reduce different symptoms associated with hayfever, including itchy and burning eyes. Some popular products used in the management of hayfever include:

What is sodium Cromoglicate eye drops used for?

Sodium cromoglicate eye drops are used in the management of hayfever symptoms of eyes such as itchiness, redness and water eyes.

Is sodium cromoglycate an antihistamine?

Sodium cromoglycate is not an antihistamine, although it prevents the release of histamine (which causes symptoms of hayfever) trough a different mechanism to commonly available antihistamines.

Is sodium cromoglycate a steroid?