What is the recommended management of migraine attack?

Migraine management with drugs in broadly divided into prophylactic treatment (to prevent migraines) and acute treatment for managing migraine-associated headaches and nausea. This post will focus on the acute management of migraines with drugs, which can be purchased over the pharmacy counter.
NICE guidance on the management of acute migraine recommends the following drugs:

Simple analgesics, such as paracetamol, ibuprofen or aspirin, can be considered a first choice in managing migraine headaches. Paracetamol and ibuprofen are available are most grocery shops and supermarkets. The wide availability of both drugs is advantages. Additionally, specific formulations, for example, soluble forms of paracetamol may be a preferred choice to help with acute migraines, since soluble formulations tend to work faster.
Simple analgesics which can be used in the management of migraine:

Over the counter paracetamol is available in different forms with tablets and capsules being most popular. Smaller packs of paracetamol (contain 16 tablets or capsules) are available in all supermarkets and pharmacies for patient self-selection. Over the counter paracetamol usually have restrictions on the quantity purchased, which may vary during COVID-pandemic due to paracetamol shortages. Legally, In the pharmacy customers can buy up to 100 tablets or capsules without a prescription.

Is paracetamol effective painkiller for migraine?

Compared to no treatment at all, paracetamol was found to be (statistically) better in treating acute migraines (Derry & Moore, 2013) with a low incidence of side effects.
There are plenty of paracetamol brands, most of which contain a standard adult dose of 500mg of paracetamol per tablet.

What is the best paracetamol for migraine?

Paracetamol can be considered as a first-line treatment of migraine attacks due to low cost, good availability. Paracetamol should be regarded as a first option by people who cannot take other analgesics such as nonsteroidal anti-inflammatory drugs (NSAIDs) or aspirin (ibid).
As it has been shown (Rygnestad et al., 2000), soluble paracetamol offers quicker onset of action (start to work faster) than standard paracetamol tablets or capsules, making it most appropriate in the management of acute episodes of migraines. 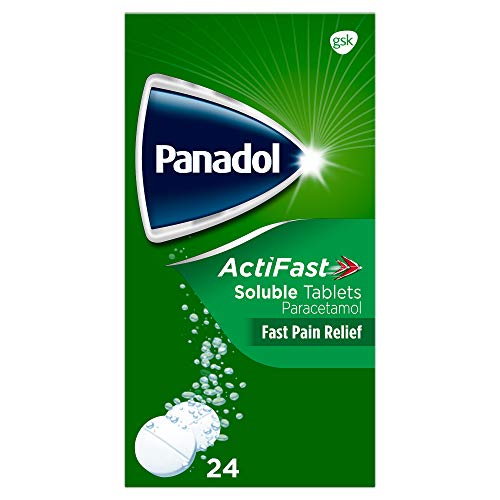 Ibuprofen is another common painkiller widely available in shops and pharmacies. Standard ibuprofen tablets/capsules available off the shelf contains 200mg of ibuprofen. ‘Stronger’, 400mg ibuprofen can be purchased from the pharmacy only.

The same pack size restrictions apply, when ibuprofen is available for patients’ self-selection. It is possible to buy larger quantities of up to 100 tablets from a pharmacy counter.

Adults can take paracetamol at the same time as ibuprofen. Advice on concomitant use of paracetamol with ibuprofen is different for children. Ibuprofen is not available as soluble tablets, only as oral suspensions (children’s formulations).

Is ibuprofen effective painkiller for migraine?

Ibuprofen is considered as an effective treatment of headaches caused by migraine; however, only about half of people will benefit from the treatment with this drug. A higher strength of ibuprofen (400mg per tablet, available from pharmacies only) is more effective than lower strength ibuprofen (200mg per tablet) for migraine headache. Soluble forms of ibuprofen provide faster relief from the symptoms (Rabbie et al., 2013).

What is the best ibuprofen for migraine?

Ibuprofen is available in form of fast-acting formulations. Two popular formulations for ibuprofen, which are advertised to provide ‘fast’ relief from symptoms are described below.

ibuprofen lysine, also known as lysine salt of ibuprofen, can be purchased over the counter in most supermarkets and pharmacies. For example: 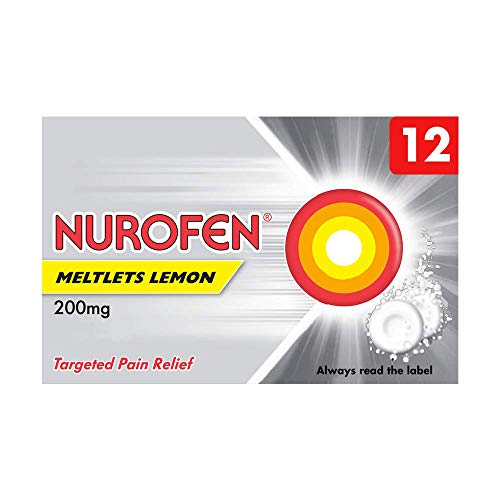 Higher ‘strength’ of aspirin (aspirin 300mg) can relieve migraine-associated headaches, as opposed to baby aspirin, which is not used as a painkiller. Aspirin should not be used in children under 16 years of age. Aspirin belongs to the same class of medication as ibuprofen – NSAIDs.

Aspirin can be purchased on its own; however, there are plenty of combination products containing aspirin, caffeine and paracetamol.

Is aspirin effective for migraine headache?

High dose of aspirin is an effective treatment for migraine headache; however, similarly to the treatment with ibuprofen, not all people may get sufficient response (Kirthi et al., 2013).

Alka-Seltzer offers a benefit of two different active ingredients (paracetamol and aspirin) and soluble formulation, which provides a fast response.

Alka-Seltzer contains also caffeine. There is good evidence that shows that when a dose of caffeine (equivalent to a mug of coffee) is added to analgesics (particularly paracetamol), it provides better pain relief (Derry et al., 2014).

On the other hand, some patients who use caffeine are more likely to develop a ‘rebound headache’ (headache come back). Caffeine is known to be a diuretic, which means it makes people urinate more. Too much caffeine may potentially cause headaches. 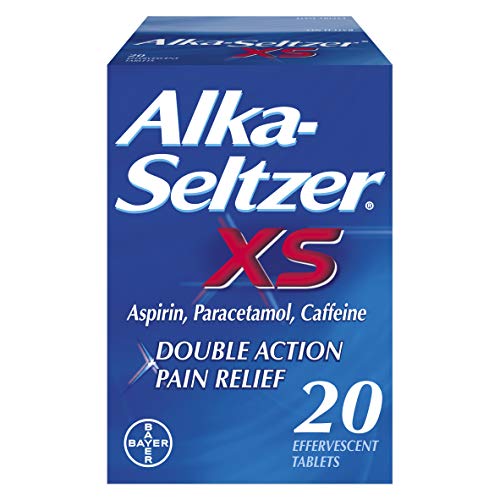 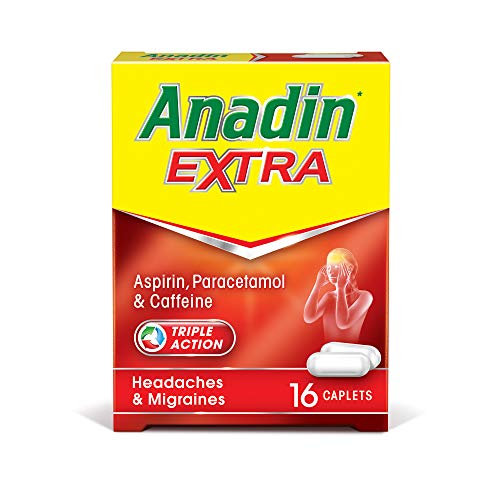 Anadin Extra may be considered for patients seeing a combination of paracetamol and aspirin (NSAID).

Nuromol is a pharmacy-only product which contains paracetamol and ibuprofen. There is some evidence which suggests Nuromol works better than taking individual drugs alone.
Nuromol can only be purchased from pharmacies, including online chemists. Learn more about Nuromol.

Codeine available over the counter can only be purchased in combination with paracetamol, ibuprofen or aspirin. All codeine products are licensed for short-term acute pain management, for example, headaches, migraine, and dental pain.

So far, I have not reviewed any possible side effects for drugs listed in this post. Codeine and codeine-containing products, however, may cause some common side effect including:

Is codeine the best painkiller for migraine?

National guide for the management of acute migraine symptoms does not recommend taking codeine/codeine-based products to help with migraines. Codeine can make some migraine symptoms worse, for example, nausea. Additionally, customers who take codeine-products may experience other side effects, such as drowsiness. Over the counter codeine can only be used for three days due to addictive properties.

Paracetamol and codeine are used to relieve headache, whereas buclizine (antihistamine) to relieve migraine-associated nausea. In addition to previously listed common side effects, buclizine can commonly cause dry mouth and headaches.

Migraleve Yellow tablets are very similar to many standard co-codamol tablets available over the counter, with the exact amount of paracetamol and codeine. There are few alternatives to Migraleve, which may be considered.

Doxylamine is an antihistamine, which is added to help with nausea caused by migraine. Similarly to buclizine found in Migraleve, doxylamine can commonly cause headaches (eMC, 2020) in addition to other common side effects, including dry mouth, blurred vision and gastrointestinal side effects.

Solpadeine Max and Solpadeine Migraine contain the highest amount of codeine per tablet that one can buy over the counter – 12.8mg per tablet.

What is the best Solpadine product for migraine?

Customers who want to use over the co-codamol or another codeine-containing product should consider using a soluble formulation of the drug(s) as this form may provide the fastest relief from symptoms.

Nurofen Plus is another popular product containing codeine. Nurofen Plus contains a combination of ibuprofen with codeine.

14. Over the counter migraine medication: sumatriptan

Sumatriptan offers a different approach to the treatment of acute migraine headaches. Sumatriptan belongs to a group of drugs called ‘triptans’. Sumatriptan is the first drug within the class introduced to the market, and the only triptan available over the counter without a prescription.

In contrast to previously reviewed analgesics, sumatriptan does not work as a standard painkiller for migraine. The primary mechanism of action by which sumatriptan and other triptans help to relieve migraine headache is through vasoconstriction (narrowing) of the blood vessels. The simple explanation of migraine headache is dilation (widening) of the blood vessels in the brain – ‘vascular hypothesis’ of migraine (Brennan & Charles, 2010), although the causes physiology of migraines are more complex.

Over the counter sumatriptan for migraine: restrictions on supply

Over the counter sumatriptan is available as pharmacy-only medicine (available from pharmacies and online chemist only), sold as:

Screening questionnaire confirms the suitability of the treatment and covers other medicines taken and concomitant conditions. I included more details about the questionnaire in a separate post: How to get sumatriptan over the counter?

Is sumatriptan the best for migraine?

Sumatriptan is considered as an effective medicine for migraine. Sumatriptan 50mg in the form of tablets (available over the counter) is the least effective in relieving migraine headache when used in oral form and dose of 50mg per tablet (ibid).

As a class, triptans offer equal or better treatment outcome than NSAIDs (ibuprofen) or paracetamol. Use of sumatriptan or other ‘triptans’ together with other analgesics, such as paracetamol may provide better control of migraine headache than taking individual drugs alone (Cameron et al., 2015).
Sumatriptan and other ‘triptan’ are associated with increased risk of side effects. Some noticeable side effects are named as ‘triptan sensations‘ and may include:

What is the best over the counter migraine medicine in pregnancy?

The NICE guideline recommends self-care measure; for example, avoiding migraine triggers are recommended where possible. If drug treatment is needed, paracetamol is considered a first-line drug for managing migraine symptoms in pregnancy and breastfeeding. Other drugs would only be considered if paracetamol did not work.

Non-drug option, alternative option for migraines in pregnancy to consider: 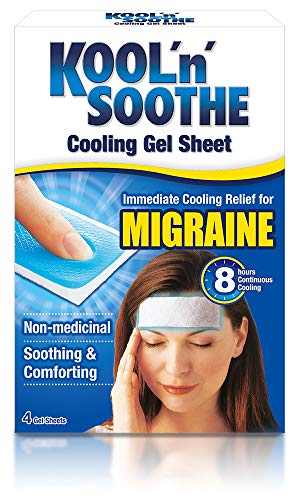 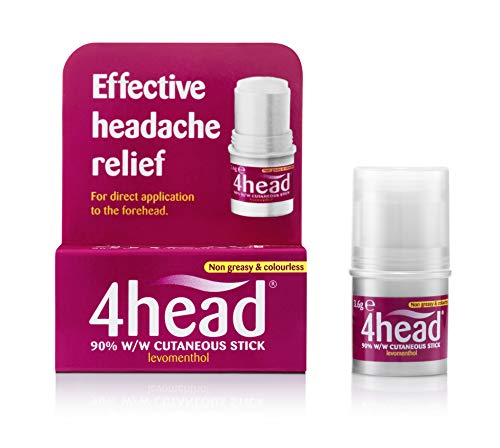 Conclusion: the best over the counter migraine medicine?

People who suffer from migraines have a choice of different over the counter painkillers. Simple analgesics such as paracetamol and ibuprofen may provide relief from migraine headache in some people.

When possible, the soluble formulation should be used to faster onset of action, providing more rapid relief from migraine headaches.

Combination products, for example, paracetamol and ibuprofen (Nuromol) or aspirin and ibuprofen may be advantageous and offer better efficacy in the symptomatic management of migraines.

The ‘gold standard’ of acute migraine management is a class of drugs called triptans. At lower strength sumatriptan (50mg) tablets can be purchased without a prescription from pharmacies. Addition of simple analgesic to sumatriptan, for example, ibuprofen may provide better relief of migraine headaches.

Although sumatriptan is not classified as an analgesic, it can be named the best painkiller for migraine headache. Higher doses of sumatriptan and different forms, especially subcutaneous injection of sumatriptan are more effective in the management of acute migraines.

According to the national guide, codeine is not recommended for migraines.

NICE (2012). Botulinum toxin type A for the prophylaxis of headaches in adults with chronic migraine. Available at: https://www.nice.org.uk/guidance/ta260 Accessed on 05/01/2021