In a pharmacy, patients request a pain relief medication due to a toothache quite commonly. Seeing a dentist to investigate the cause of pain is crucial. In the meantime, the patient may consider the use of over the counter medicines to manage the pain. Although it is difficult to point out a single best pain reliever for toothache, patients may see pain reduction with any of the drugs reviewed below. A combination of two or even three different product is possible with over the counter medicines. I will discuss leading painkillers available in pharmacies for the management of a toothache. I will also list a few prescription-only drugs which can be prescribed by a dentist. Summary of the post:

Management of dental pain with paracetamol

Paracetamol is a ‘gold standard’ in the management of the pain and is usually recommended as first option for mild pain. Customers can purchase paracetamol over the counter in all supermarkets, pharmacies and ‘corner’ shops. When severe pain is experienced, patients need to maximise the use of paracetamol by taking the full recommended dose. The recommended dose for paracetamol in adults and children over 16 years of age is:

Paracetamol helps to reduce pain and fever (high temperature) if present. High temperature with a toothache is possible when a dental abscess (infection) is present.

Paracetamol can be taken with other pain relief drugs for a toothache such as Nonsteroidal Anti-inflammatory Drug (NSAIDs), which are discussed in the next paragraph.

Is paracetamol the best pain reliever for a toothache?

Paracetamol is considered as an effective painkiller for a toothache. When taken in combination with NSAIDs such as ibuprofen, paracetamol has shown to be more effective in pain reduction than combination product containing codeine (Teoh, 2020).

Ibuprofen is the most common NSAIDs available over the counter. Customers can purchase ibuprofen 200mg in shops and pharmacies, where a product is available for self-selection and limited in sale to two packs of 16 tablets. It is possible to buy ibuprofen 400mg tablets from a pharmacy counter and up to 100 tablets. Read more about over the counter ibuprofen.

Ibuprofen has two actions in the body. It reduces fever and inflammation. As anti-inflammatory drug ibuprofen is less effective than other (prescription) NSAIDs; however, it is associated with a lower possibility of side effects.

Similarly to paracetamol, ibuprofen can be taken at a maximum dose to get the best pain relief effect. The maximum recommended daily dose for ibuprofen 400mg is:

Ibuprofen can be used together with paracetamol at the same time (adults). In fact, one branded combination products, which contain paracetamol and ibuprofen, is available in the UK. Nuromol tablets contain a combination of paracetamol with ibuprofen in one pill. Information provided by the manufacturer of Nuromol suggests that this drug is more effective as a painkiller as compared to taking individual drugs alone.

Nuromol is a pharmacy-only product, which means customers can only buy it from pharmacies, including online chemists.

Branded versions of ibuprofen 200mg and 400mg are available in form of liquid capsules (Nurofen Express), which may provide for faster pain relieve as compared to a standard formulation of ibuprofen tablets. 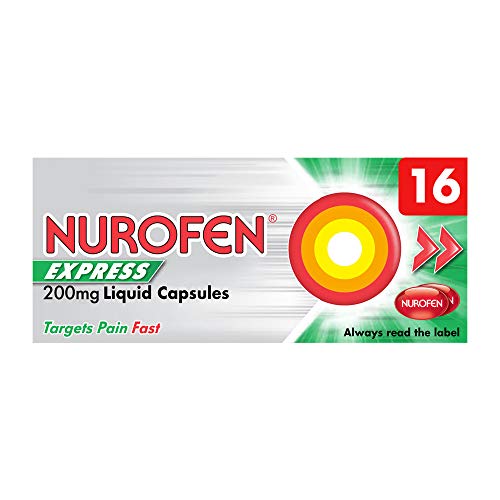 NSAIDs are regarded as the first option when it comes to the management of dental pain. Some evidence exists, which suggest NSAIDs are better (more effective) for a toothache than opioids such as codeine (Teoh, 2020) owing that not only NSAIDs reduce pain, but also swelling and hyperalgesia (sensitivity to the pain).

NSAIDs, together with paracetamol, are regarded as the first-line option in the management of toothaches.

Use of aspirin as pain reliever for a toothache

Aspirin also belongs to the NSAIDs group of drugs. Aspirin used in the management of pain, including toothaches. When used as a painkiller, the standard formulation of aspirin contains 300mg of aspirin as an active ingredient. Higher dose aspirin differs from a low-dose aspirin (baby aspirin), which some people take daily as secondary prevention of cardiovascular diseases, such as deep-vein thrombosis (formation of a blood clot in the vein) or pulmonary embolism (formation of a blood clot in blood vessels found in the lungs).

Codeine combination products as pain relief for a toothache

Is codeine the best pain reliever for a toothache?

Management of dental pain with codeine has limited use. Many customers request over the counter co-codamol to help with a toothache. Perhaps one benefit of codeine is that it can cause drowsiness and sedation, which may be favourable when a toothache is experienced at night.

Codeine products for toothache – limit on the use

Products which contain codeine should not be used for more than three days when purchased over the counter. Limit on the use of codeine products reflects the addictive properties of codeine.

Possible side effects with codeine products

Taking codeine and codeine-containing product is associated with side effects. The most common side effect which may be experienced are:

Lastly, there is a variation in response to codeine between people who take this drug. In simple terms some people may experience a little effect from codeine, others may be affected much more and experience number of side effects, even with products taken over the counter.

Codeine and paracetamol (Co-codamol) for a toothache

Co-codamol is one of the most commonly requested over the counter painkillers. Co-codamol can be considered as an analgesic option to relieve acute moderate pain, including toothache, which is not managed successfully by other analgesics such as paracetamol or ibuprofen (alone).

‘Standard’ co-codamol tablet contains 500mg of paracetamol and 8mg of codeine. Co-codamol is available as tablets or effervescent tablets, which dissolve in the water. Most pharmacies sell co-codamol as own branded product, which is usually the cheapest option. Plenty of other brands exist, for example, Veganin, which do not differ a lot in term of active ingredients.

Some brands of codeine products contain more than 8mg of codeine per tablet, for example, Solpadine Max range of co-codamol:

You can read more about over the counter co-codamol in one of my previous posts.

Codeine and ibuprofen for a tootache

Codeine can also be bought in combination with ibuprofen. Nurofen Plus contains 200mg of ibuprofen and 12.8mg of codeine per tablet. Nurofen Plus can be used by adults and children over 12 years of age.

Similarly to co-codamol, Nurofen Plus is licensed for the management of acute pain such as toothache, which is not relieved by simple analgesics such as paracetamol, ibuprofen or aspirin alone.

Nurofen Plus (codeine & ibuprofen) can be taken alongside paracetamol. The use of Nurofen Plus is limited to three days only.

Paramol tablets are made up of a combination of two active ingredients: paracetamol 500mg and dihydrocodeine 7.46mg per tablet, commonly known as co-dydramol. Similarly to co-codamol, co-dydramol is a weak opioid. It has similar pain relief properties to that of codeine. With higher doses (prescription-only), dihydrocodeine may offer additional pain relief; however, at the expense of nausea and vomiting (BNF, 2020).

Effectiveness of co-dydramol as a pain reliever in toothache

Customers who consider taking over the counter co-dydramol may not experience a significant benefit in relieving toothache as compared to a combination of other simple analgesics.

No specific studies comparing the effectiveness of co-dydramol with other analgesics exist. One study which looked at the efficacy of dihydrocodeine as compared to ibuprofen as a single dose in post-operative patients concluded that ibuprofen (400mg) is better pain reliever than either dihydrocodeine 30mg or 60mg (Cochrane, 2000).

Local anaesthetic gels as a pain reliever for a toothache 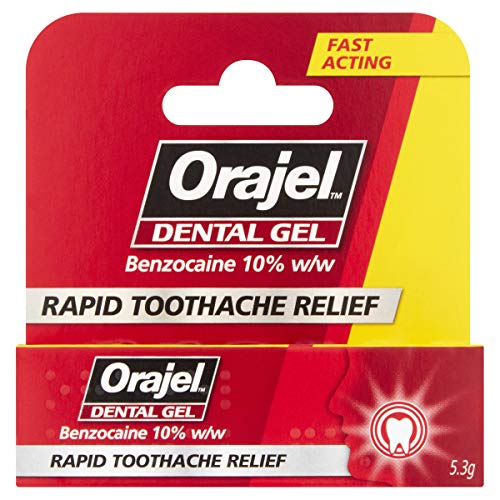 Orajel Dental and Orajel Extra Strength can be used by adults and children over 12 years of age.

Orajel can be used alongside other analgesics such as paracetamol and ibuprofen.

Is Orajel useful as a pain reliever for a toothache?

A study of 576 participants with acute toothaches found that benzocaine 10% and 20% is more effective than placebo (a dummy product) when applied locally to an open tooth cavity and surrounding oral tissues. Benzocaine 20% was more effective in relieving pain than 10% gel. Overall, the study concluded that Orajel is effective, well-tolerated, and patients can use it safely as a temporary treatment of toothache (Hersh et al., 2013).

Prescription-only medicines for a toothache

As we can tell, the above options are limited in terms of pain management, although diclofenac (another NSAID) is a more effective pain reliever as compared to ibuprofen. Dihydrocodeine 30mg is a prescription-only medication. Some patient may find that a higher dose of dihydrocodeine is more effective in reducing pain than over the counter products containing codeine or dihydrocodeine. However, this may happen at the expense of side effects.

Alternative options for drugs which may be prescribed by a dentist on private prescription include:

Over the counter codeine or dihydrocodeine containing a product may offer less pain relief when experiencing a toothache. Instead, patients may experience side effect associated with opioid use such as drowsiness, sedation, nausea and constipation.

In addition to oral drugs for pain management, customers have a choice of a local anaesthetic gel like Orajel, which proven to relieve dental pain. Orajel or Orajel Extra can be used alongside standard analgesics such as paracetamol or ibuprofen.

Customers who experience a severe toothache should consider the use of two analgesics with the possible addition of a local anaesthetic gel. Additionally, one needs to optimise pain management by taking the full recommended dose of the drug as per product instructions.

Lastly, customers need to remember that many over the counter products contain similar ingredients and not all products can be taken at the same time.

Always read the product information leaflet before taking medication and follow manufacturer directions or directions from your prescriber. If in doubt, speak to your pharmacist.

What is your best pain reliever for a toothache? Please leave a comment below.

Which is best painkiller for toothache?

There is no single best painkiller for a toothache. Patients should consider the use of a combination of medicines, such as paracetamol and ibuprofen in addition to a local anaesthetic gel to make the best treatment option.

What is the best OTC pain reliever for toothache?

Patients who seek the best OTC pain relief medication should consider using a combination of 2 or 3 single medicines as described in the above post.