Common causes of nausea and sickness

There are many reasons which can cause a feeling of nausea. Some common reasons include:

Nausea and vomiting: do I need to see my GP?

There is no need to see GP, when nausea or vomiting is experienced by an adult with a known cause, for example, a stomach bug. Food poisoning is usually self-resolving, which means that the main symptoms – diarrhoea and vomiting should go on their own. If both symptoms are present, the key is to stay well hydrated to avoid dehydration. Parents of young babies and toddlers who are worried about their child should call NHS 111 service. An adult who experiences vomiting for more than two days or and adult who has the symptoms of dehydration.

Can you buy anti-sickness tablets over the counter?

All products used in the management of nausea are pharmacy-only medicines (P). ‘P’ medicines are sold in pharmacies, only including online chemists. Anti-sickness tablets available over the counter are used to prevent and treat mainly:

Anti-sickness tablets over the counter – overview

Over the counter drugs which are used in the treatment and prevention of sickness belong to one of the following classes of drugs:

The use if both classes of drugs is associated with drowsiness.

Hyoscine is classified as anti-muscarinic drugs. Hyoscine is one of the most effective drugs to prevent sickness caused by travelling. 1Its limits include a short duration of action and number of common side effects, of which drowsiness is most prominent.

Kwells are one of the most known brands of tablets used to prevent travel sickness.

Kwells contain hyoscine hydrobromide as an active ingredient. The main advantage of Kwells as anti-sickness tablets is a rapid onset of action (start to work fast). Kwells melt in the mouth, speeding up the absorption process. They can be taken 20-30 minutes before travelling or when one experiences symptoms of nausea and sickness.

Kwells can be used by children and adults over ten years of age. Younger children (below 10) can use Kwells Kids to prevent motion sickness.

Joy-rides tablets are another brand of hyoscine containing tablets for prevention of motion sickness. Joy-rides are licensed for adults and children from 3 years of age.

Joy-rides contain the same amount of hyoscine hydrobromide per tablets as Kwells Kids. Joy-rides should preferably be taken 20 minutes before the start of the journey.

Last on the list of hyoscine containing medicines are Scopoderm patches. As with previously discussed products, Scopoderm patch is a pharmacy-only medicine used to prevent travel sickness symptoms including nausea, vomiting and vertigo.

The main advantage for the use of Scopoderm patches is the extended duration of action of each patch. When applied, One Scopoderm patch should provide anti-sickness protection for up to 72 hours.

Scopoderm patch comes in a box of two patches, which may cost over £15, which is significantly more expensive than hyoscine-containing tablets.

Cyclizine is not commonly sold or displayed to the public. Almost with certainty, one needs to ask a member of a pharmacy team to get cyclizine from the pharmacy should they wish to purchase this drug.

Cyclizine is an ‘old’ antihistamine, with the drowsiness being the main side effect for this drug.

Promethazine is mostly known as a sedative antihistamine, which is used in ‘cold and flu products’ such as Night Nurse and over the counter sleeping pills. The main difference between promethazine and hyoscine anti-sickness tablets is a prolonged duration of action and significant drowsiness associated with their use.

Products containing promethazine, which can be used to stop sickness and nausea include promethazine 10mg and 25mg tablets (Phenergan) and Avomine.

Avomin tablets contain 25mg promethazine theoclate. Adults and children over nine years of age can use Avomin tablets for prevention or treatment of travel sickens.

As I already mentioned, promethazine is a common ingredient in ‘cold and flu’ medicines where sedation is preferable and over the counter sleeping pills. Promethazine in its generic form and branded as (Phenergan).

Buccal tablets are placed on the (top) gum, under the lip and allow to dissolve.

When used over the counter, Buccastem M tablets can only be for a maximum of two days. Occasionally, a GP may prescribe Buccastem M or generic buccal prochlorperazine or prochlorperazine 5mg tablets.  In this case, follow the directions from your GP for dose instructions.

Not all patients can use over the counter prochlorperazine tablets. There are several groups of patients, who should not use Buccastem M tablets, including patients with:

Migraleve tablets are a well-known brand of tablets used for symptomatic management of migraines. Like other over the counter codeine-containing medicines, Migraleve can be used to manage acute, moderate pain for which paracetamol, ibuprofen or aspirin did not help. The licensed recommendation also includes the management of migraine-associated nausea and vomiting.

Buclizine is an antihistamine, which works as an anti-sickness drug in a similar way to promethazine (discussed earlier).

Syndol is another combination product containing codeine, paracetamol, and additionally caffeine and doxylamine. Syndol has a similar use to Migraleve and other over the counter codeine products. Doxylamine is classified as an antihistamine, and it is known to reduce nausea and vomiting.

Codeine and codeine-containing products have some restrictions when purchased from the pharmacy:

Pepto-Bismol for upset stomach and nausea

Pepto-Bismol range of products (including chewable tablets) are advertised to relief five symptoms:

Read product information leaflet to learn if Pepto-Birmol is suitable for you, or speak to your pharmacist.

The exact mechanism of action of Pepto-Bismol is not known, but anti-nausea properties are different to all anti-sickness tablets discussed in this post.

Can you use OTC anti-sickness tablets in pregnancy?

The management of ‘morning sickness’ include self-care advice, for example, rest, appropriate fluid intake, and having small but frequent meals (ibid).

Pregnant women who request over the counter anti-sickness tablets will most likely be referred by to their GP.

Drug treatment is only considered after a self-care measure failed to relieve nausea or/and sickness.

A NICE guide on nausea and vomiting in pregnancy recommends an antihistamine, for example, cyclizine or promethazine or phenothiazine drug such as prochlorperazine as a first-line anti-sickness drug. Pregnant women usually need reassessment after 24 hours.

Other prescription-only drugs which are considered if the above medicines failed to provide adequate control of symptoms include:

Treatment with the above drugs is usually limited to 5 days only.

Alternative, non-drug products, which are a popular choice as anti-sickness remedies include a range of motion sickness patches and sickness relief wristbands. Anti-sickness wrist bands are based o the principle of acupressure, whereas patches may contain herbal ingredients. 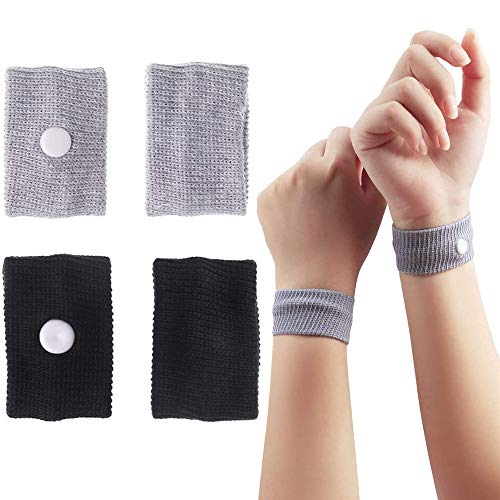 NICE (2020). Nausea/vomiting in pregnancy. Available at: https://cks.nice.org.uk/topics/nausea-vomiting-in-pregnancy/ Accessed on 23/12/2020